i, too, thought of death when i saw this word. but my associations made me too sad to write last night, so i didn’t.

i thought about when my grandmother died. one of the only people i felt was on my team…though i think she probably was on everyone’s team, that’s the kind of person she was.

she died of cancer, wasted away over a series of months. knew it was coming, could plan. as she got weaker, during the days she would still bother putting on her wig, before the days when she stopped eating and would only sleep the awful moaning sleep of people tortured by chronic pain, she would send me into the corners of her basement or her linen cupboard or her bedroom closet to seek out jewellery boxes and tea towels and other precious things. wanted me to pick things out to keep, for after she was gone. i kick myself now, because teenaged-me couldn’t bring myself to choose anything, it was too awful…but what i wouldn’t give to have a bracelet of hers, or one of her rings, or her clip-on earrings. or her nightgowns, even. or her eyeglasses, oh god, that makes me cry to think of those. something i could hold in my hands, y’know?

the last weekend i saw her, her sister-in-law was visiting. and for some reason, this stupid old cow, who was shitty to her in life, who was coming to do her duty, who was coming to gawk and stare and ‘pay her respects’ would not get the fuck out of the room as i was saying goodbye to her. like, my final goodbye. she sat there, this stranger i had only seen maybe twice before in my life, watching me as i completely lost it, as i held my grandmother’s soft, translucent hand to my cheek, as i cried so hard i could hardly breathe, where my mom eventually ushered me out of the room because i was ‘making a scene’. and yeah, i fucking was. coz who would protect me now?

so, that’s what i thought of. i miss her all the time. it will be 28 years next month, which is unbelievable. i’ve been without her far longer than i had her, but i still feel her love.

i used to read these ‘choose your own adventure’ books when i was a kid…anyone remember those? 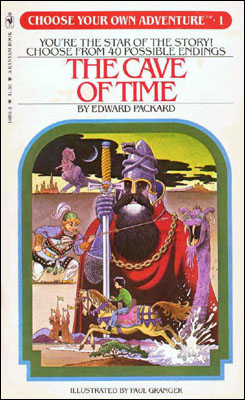 those were so so fun. i would get lost in all the twists and turns of those books…i know they were formulaic, but maybe i wasn’t that bright a kid?

unfortunately when i think of them in the context of now, they feel tainted…sad. coz this is not the adventure i’d choose. no one would. (although, without it, i wouldn’t have my pocketbrit. and i would choose her time and again.)