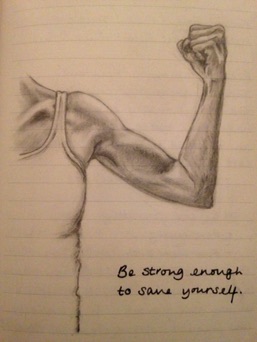 When I was younger I was even more of an idiot than I currently am, and I decided I wanted to make myself physically strong. It wasn’t a conscious decision, I just seemed to start doing it. For all sorts of reasons… I hated nothing more than my mum telling me to leave something and get my brothers to lift or carry it because they were stronger. Pocketcanadian will testify to my belligerence… and tell me not to do something, (especially if its based on the fact that I’m a girl and therefore not strong enough), and I’ll fucking well make sure I do it. It used to make me so mad, and for a while I’d always shout back that just because I was a girl doesn’t mean I’m weak and incapable (and I certainly wasn’t).

I also, I think, decided that I wanted to be better able to protect myself, and so began the getting stronger. And people wouldn’t look at me now and think I’m strong, but I’m certainly not weak. Nobody else would ever protect me, so I started subconsciously making it easier to protect myself. It felt safer, to feel stronger.

And lastly, being physically strong somehow makes me feel more emotionally strong. And yeah, doing exercise definitely makes me feel better (though it’s normally just about the last thing I want to do). It shuts off all of my “weak” feelings, and keeps me feeling walled up somehow. That sounds completely ridiculous, but there you go….

I hate myself when I’m like this. Its a terrible circle…because when I am hating, I hurt people, and shout or want to hurt innocent animals. That then makes me hate myself the moment the rage begins to subside, and I think about how awful a person I am. That then in turn tends to turn me back to rage and hating myself, and you’re stuck in this cyclical pleasure ride.

Something pc said to me, (after sticking with me through that night, no matter how awful I was), was that she wants to know this part most of all, that she was the biggest protector… And I guess she was. Because all of the hate, all of the anger, became contained. It was separated, and it was felt when it was generally safe, and it was almost all directed inwards. She kept me safe, by making me angry at myself and nobody else. She kept me small, and feeling strong, and blaming myself. And that, in its own very screwed up way, kept me safe. It kept me from acting out and being on the receiving end of retaliation. And it kept me from the unbearable grief of placing that anger where it belongs and realising that no one would listen or help.

I  really want to end this with some lovely sentence or two to summarise, but I can’t, because really it just feels like one bloody big mess in my head.